Your building and pest inspection report is the only document that can bring sellers back to the negotiation table. Problems on the report mean you can reopen negotiations. Even if you only suspect a problem with the property, it pays to invest in a class leading inspector. A thorough report by an industry leading inspector makes real estate agents nervous, very nervous. A ‘half hearted’ inspection report is easy to dispute and will rob you of the upper hand in negotiations.

WHY NEGOTIATE AFTER A BUILDING REPORT

A building report can uncover many faults and issues with a home. Both investors and homeowners can massively save on the purchase cost of a home by negotiating the asking price based on the faults and issues identified in the building report. If a seller is motivated to sell, they may be willing to reduce the price due to these issues. It is important that buyers understand what building reports actually say and how they can be used in a negotiation. Small issues like poor drainage, lack of maintenance and larger issues such as termites, an unsafe deck or floor damage can all be used to negotiate the asking price down, especially if large renovations are needed.

GET CREDIBLE EVIDENCE FROM A BUILDING REPORT

Ask your lawyer what a difference credible evidence makes in negotiations. When your lawyer goes into battle for you, equip them with the HARD evidence they need. Arm them with the documentation they need to tank the purchase price and see you coming out way ahead.

IT’S NOT JUST ABOUT PROTECTING YOU FROM A LEMON PROPERTY

Of course, your pre-purchase inspection should give you peace of mind but savvy investors know it can give you so much more. If your report shows problems, your building inspector is a key player in your investment team and the stakes are high. Why wouldn’t you hire a pro?Ask your lawyer what a difference credible evidence makes in negotiations. When your lawyer goes into battle for you, equip them with the HARD evidence they need. Arm them with the documentation they need to tank the purchase price and see you coming out way ahead. 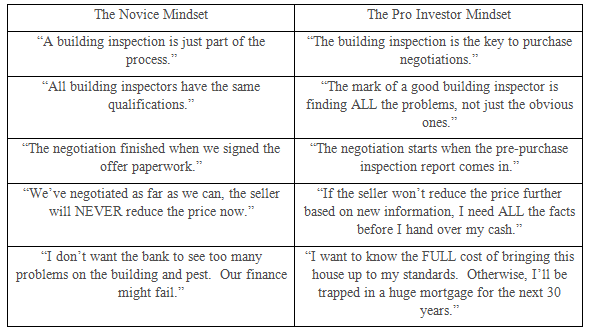 HOW TO NEGOTIATE WITH THE REAL ESTATE AGENT AFTER PROPERTY INSPECTION

And if the seller still won’t budge? It happens. Not all sellers are pros. Now you have ALL the information, are you still willing to dive into this property? At least you know before you buy.

Learn the shocking cost of a cheap pre-purchase inspection here.

“We recently had a client who was presented with a building inspection report organised by the vendor. The agent thought the deal was done and dusted as my client said they were happy to proceed based on the report they were handed. Luckily common sense kicked in when they thought the report sounded too glowing and was quite vague.
The differences in our inspection report were staggering. Our report showed up substantial structural corrosion to the supporting steel posts, some of which were built into the external perimeter walls. The vendor’s building inspection report failed to mention the steel posts at all and also failed to make mention of substantial water flow occurring under and around the house during rain periods that contributed to the post corrosion. Our report also uncovered the lack of building approval for the crudely built rear veranda and previous termite damage to the carport, none of which was mentioned in the vendor’s building inspection report.

Armed with our building report our client renegotiated a further $45,000 off the asking price to contribute towards rectification works. Had our client relied upon the vendor’s free report, they would have been over $50,000 worse off before they even moved in.”

ARE YOU READY TO NEGOTIATE YOUR PURCHASE PRICE?

Get A Quote Now