So you have just had your building and pest inspection completed on your dream home and your inspector has just informed you that your house has sustained damage due to a termite attack. So what now. One option would be to shed a little tear and then run for the hills and don’t look back, but before you panic all may not be lost. 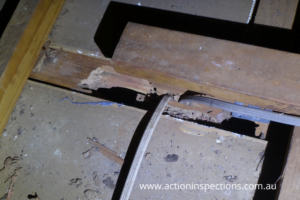 Firstly if you have engaged a reputable Brisbane building inspection company they should be able to clearly explain the extent and severity of the termite attack so that you can put it into perspective. In some instances a reputable inspection company will also advise that you undertake a invasive inspection before you purchase the house to accurately determine the extent of termite damage where there is a risk of further damage in concealed areas unable to be inspected. Less professional inspectors may simply generalise or over dramatise the extent of the damage. Undertaking an invasive investigation could save a lot of heartache later. 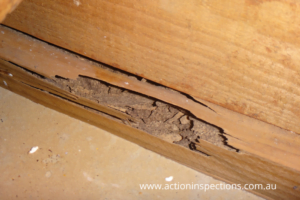 Although a termite attack sounds scary it may not be as bad as you think. If for example you’re inspector has confirmed that the termite attack was confined to your lounge room and damage has been confined to a couple of lineal metres of wall framing, the rectification works are relatively simple and straightforward. The cost of repairs is likely to be relatively minimal e.g. five wall studs, a bottom wall plate, some plasterboard and repainting and then as good as new.

On the flip side however

If the same couple of lineal metres of wall damage is within a bathroom area the extent of rectification is usually significantly greater. In this situation you will have the additional cost of a full bathroom renovation after the termite damage has been repaired. Alternatively, if the damage has extended to structural load-bearing components such as roof support beams, lintels above window and door openings etc then the cost of rectification works is also likely to be significantly greater.

If it is established that the termite activity is still current then an immediate termite treatment will be required followed by the installation of a termite barrier or monitoring system.

So what to consider So if you take on a house that has sustained termite damage, you need to come to an agreeable price reduction to cover the costs of rectification works and any inconvenience you may encounter. You also need to work out whether you want to deal with the hassle of tradesmen invading your house to undertake the rectification works. Many people simply want to move in and have no dramas. As previously mentioned, undertaking relatively straight forward termite rectification works is relatively simple and comparatively cheap. It has probably taken you a long time to find this house so in this situation negotiating a price reduction and proceeding as normal is likely to be the best option. However, if the extent of termite attack is significant then it may be more prudent and convenient to simply find a far better house without termite attack. Don’t panic and buy the first house that comes along. There will be another Brisbane property out there with your name on it.

Book our experienced Brisbane building inspector for your next property purchase.

Buying in McDowall? You Need a Pre-Purchase Property Inspection!

McDowall on Brisbane’s north side is a high demand market, so if you’re interested in purchasing a property there, don’t procrastinate! If you don’t get in soon, the house you’ve been dreaming of will...

END_OF_DOCUMENT_TOKEN_TO_BE_REPLACED

The fear of every homeowner in Brisbane is the threat of termites - 1 in every 3 homes in Queensland are affected. Termites can eat their way into your home and cause extensive damage...

END_OF_DOCUMENT_TOKEN_TO_BE_REPLACED

Termite damage is a real problem for Brisbane property owners. Recent industry studies have suggested that 1/3 of unprotected properties are at risk of an attack by termites. Termites; the silent destroyers Termites are incredibly destructive....