With the progression of time, cosmetic ceiling cracking and minor ceiling blemishes are fairly common in most homes. Whilst the required repairs are usually simple and cosmetic, they can sometimes be an indication of a far more serious issue. 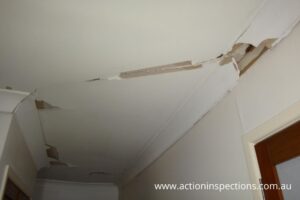 stress points. These stress points could be where a large expansive lounge room ceiling adjoins a narrow hallway. At these locations ceiling control joints are often installed to allow for possible movement and to minimise the risk of uncontrolled random cracking. It is usually a simple cosmetic repair to conceal cosmetic hairline cracks. Ceiling cracks that are more extensive may however indicate more significant issues such as house subsidence or incorrect construction of the roof. In this instance it is imperative that a building inspection is undertaken to ascertain the cause of the cracks. On a recent Brisbane building inspection in the suburb of Kenmore my client had concerns with multiple cracks to the plasterboard ceiling within the hallway. Whilst the ceiling was in poor condition and required subsequent replacement the biggest fault lay with the arching of the concrete slab and subsequent excessive separation of the external brick wall control joints. The level of house subsidence was starting to cause deterioration to the roof structure and ceiling within the hallway.

A common fault with an ageing plasterboard ceiling is what we call undulation. The humps and hollows in the ceiling are often caused by slight sagging or deflection of the ceiling joists or can be caused by a lack of back blocking. Back blocking is where sections of plasterboard are secured to the plasterboard joints within the roof to provide additional strength and to help minimise the risk of ceiling deflection. In most cases the undulation of the ceiling linings is purely cosmetic. It should however be noted that a similar ceiling fault known as ceiling deflection is more significant. This is where ceiling linings are no longer satisfactorily attached to the ceiling battens or trusses and are starting to detach. Poorly secured ceiling linings run the risk of eventual collapse and must be repaired before further deterioration occurs.

Cosmetic cracking to cornices usually requires minor plaster repair or patching with a product called No More Gaps. Buckling of the cornices at various locations may however indicate deflection of a roof truss causing deformation of the cornice. This will need to be investigated further. Truss deflection may only be cosmetic however could be due to something more significant. 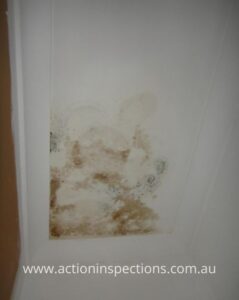 One of the most common causes of ceiling deterioration is water penetration. Water leaks could be caused by broken roof tiles, incorrect flashing installation or a lack of a sarking barrier underneath the roof tiles. Water penetration not only causes unsightly cosmetic staining, it can also contribute to deformation of the ceiling linings and in extreme cases ceiling collapse. Further investigation by a qualified building inspector or builder is required to determine the source of the water penetration before more substantial damage occurs.
As previously mentioned most homes will eventually acquire some degree of cosmetic cracking however even the most insignificant crack should always be monitored.

Not Every House Crack Spells Disaster

On a recent walk around your house you have just discovered that those tiny hairline cracks in your brickwork have suddenly become more significant. Now before you panic, take a deep breath and contact...