Sagging ceilings, also described as a ‘pillowing’ effect seen on some ceilings, definitely shouldn’t be ignored. The longer a ceiling is left to sag, the higher the risk of someone being badly injured or killed due to ceiling collapse. Most of the time sagging ceilings can be easily repaired, but first, you need to find out the cause of the sag.

There are many reasons ceilings sag, and some of them aren’t obvious which is why it’s always best to have a professional building inspector check for you. Common causes of sagging include:

If you have a leak in your ceiling, water can pool over time causing the ceiling to sag. The water can leak into the plaster and the supporting beams. We’ve also had instances where the ceiling insulation has absorbed water that has leaked through the ceiling. When this happens, insulation becomes extremely heavy, putting pressure on the ceiling.

Water damage can be repaired along with the ceiling. It’s always a good idea to have sarking sheets installed in your ceiling to reduce the risk of water penetration, particularly if you have a tiled roof. Sarking is an extra precaution against big Brisbane storms that can lift roof tiles.

Unfortunately, subpar building work can lead to the sagging of ceilings. Poor ceiling supports and load-bearing beams, missing load-bearing beams and undersized frames are common causes of sagging. The good news is poor construction can be easily repaired by replacing the improper building materials.

As homes get older, fixings and adhesives that hold the house together start to fail. It’s simply a matter of replacing these fixing and adhesives to repair the sagging ceiling. Your building inspector will be able to identify these fixtures during a pre-purchase inspection.

Even the ceiling can succumb to the dreaded termite. Termites can destroy load-bearing timber in the ceiling, causing the ceiling to sag. Termites are particularly attracted to moist areas so if you have a leak in your roof, it’s best to repair it as soon as possible. Make sure you keep up to date with property maintenance, ensure gutters are clear and the timber used in and around your roof is treated. 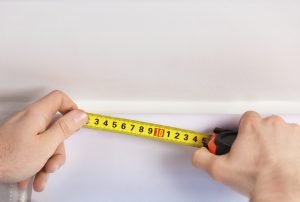 Sagging ceilings at a pre-purchase inspection

Sagging ceilings are both obvious and a house inspection red flag. What’s not obvious is the reason for the sag. Never assume it’s an easy fix. This is why a pre-purchase inspection is essential, the building inspector will be able to tell you the exact cause of the sagging ceilings and how it may be repaired. This will then give you the opportunity to determine the repair costs and if it’s worth you pursuing the purchase or not.